ANOTHER YEAR OF GREAT SUCCESS AS HUNDREDS FISH TO END MS

With a full field of 227 teams competing in the Third Annual PERCHIN FOR MS Fundraiser Perch Fishing Tournament on Sat. March 2…Another huge success was accomplished!  This year with the temperatures holding and winds kept to a light breeze…the 3rd Annual Perchin For MS Ice Fishing event was held on Saturday, March 2nd at Sibbald Point Provincial Park.

The event once again drew anglers from all over Ontario and into the United States.

The event saw 455 people take to the ice in the early hours of Saturday morning all in hopes of catching the big one…while helping to make a difference.

Each team paid a $50 entry fee of which half is donated to the Multiple Sclerosis Society.  The 10 heaviest perch win the tournament.  Competition this year was tough though.  Teams had a large group to contend with and fishing was tough going.  That didn’t phase the Winning Team of Roman Runo and Janusz Kawalec known as Team Ice Fish though.

The team was able to weigh in a weight of 6.09lbs worth of perch for their big win of the Jack Link’s Jackpot of $2000.00.  The team was also proud to display their Rapala Rod, reel and lures that won them the tournament and an extra Rapala Prize pack worth $500.00.

The winner of the Early bird Draw for a one week Fishing Getaway to Horwood Outpost was won by the Dream Team of Steve Knox and Dwaye Anderson.

The Slab Award for Biggest Fish of the event was won by Team Fish4Reel – Andrew Barter and Ryan Lennox who caught a beautiful 1.58 lb, perch.  This earned them the Shimano Cash Prize of $500.  The Rapala 36 Award was won by Team Solo Citizen – Nick Terpselas how came in 36th place winning a $500 Rapala Prize Pack.  One Mystery weight was also hit by Team Beard – Mike Riendeau and Chuck Bymes winning Humminbird Ice 35 Fish Finders each!  And as for the Lake Simcoe Message Board prize…well it was picked up by the second place team known as “Fish On” of Kyle Howe and Jeff Mitchell, getting an additional $200 cash to add to their $1200.00 second place prize!

This tournament is more than just about fishing and prizes though.  Poirier started this event to fight back against MS while raising awareness and showing himself and others that life can still go on, even with a disability.

And it appears this is what it is already doing   “This event has taken on a life of its own and helped so many already.  This year I had numerous people tell me stories of how important this event is to themselves and their loved ones who have MS.  I even had one lady break down crying…she was so moved by the tournament and what it was doing!” said Poirier.

Poirier is also very pleased to announce, that with such amazing support and generous donations that the event has raised  $17,000 that will go toward the fight to End MS.

Doug would like to thank all of his volunteers who made the event possible as well as ALL of his sponsors especially Jack Link’s Beef Jerky, Sandy Young and Laura Rackham – Royal LePage, Triton Pro Web Design, Performance Signs, The Town of Georgina Economic Development Committee, Maunders Catering – Aurora and HT Enterprises, Humminbird, Rapala, and Shimano.

Media: For more information please contact Doug Poirier at 289-231-2132 or by email at perchin4ms@hotmail.com 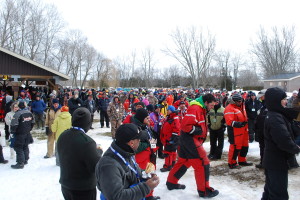 Ontario Whitetail bow hunters need to get closer than firearm hunters for obvious reasons. One way to get closer to deer when bow hunting in Ontario is to know where they travel during peak times […]