With over 100 archers donating to a great cause and the weather cooperating it was great for archers young and old for to participate in the 3rd annual Archers Against Cancer Charity 3D Shoot . During this two day event to help fight cancer numerous local businesses contributed prizes which were randomly drawn and awarded to archers during both days.

Of course all the archers that had arrived from all over south west Ontario donated to a great cause. All the while enjoying shooting at the 40 3D targets.

Kudos to the organizers for some very challenging stages. Once the final numbers are in I will update this post.

Another Great Effort by everyone involved

All proceeds were donated to the Canadian Cancer Society 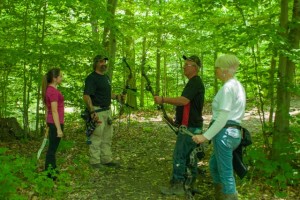 C.J. Buck- 4th Generation and CEO of Buck Knives sits down and talks with  Peter during the OFAH Conference about the importace of choosing the correct knife for your needs and requirements. Followed by CJs […]

Should Ontario Government Bring Back A Gun Registry

May 9, 2012 Peter Wood Politics Comments Off on Should Ontario Government Bring Back A Gun Registry