Finding antler sheds before the season ends makes me wonder of the health of the deer herd.

Has anyone else found deer sheds yet? 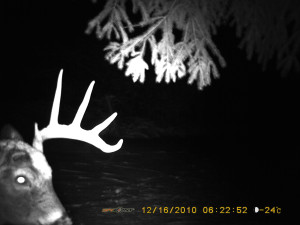 This is the second year a local buck chose to drop it’s antlers on my property. Now three and a half its looking to be a an awesome looking buck.

A rough check on this years shed score roughly at 150 if both antlers are symmetrical. 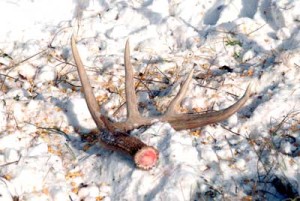 He walked up to a pile of Fixation near my feeder last night with no antlers.

Often bucks loose antlers fighting and sparring but this dropped antler was in pursuit of some Rack Stacker Deer Feed. I will be on the lookout for the right side antler.

I still have a shooter buck visiting my feeder according to my Spy-Point-Camera.

Elk Hunters in Ontario are new to hunting elk. Why not get the hunters edge with a bottle of Buck Fever Synthetic Elk Rut Juice. Order an 8 oz bottle of Elk Rut Juice and […]

Steve Bartylla With A Great Buck

December 5, 2011 Peter Wood Deer Comments Off on Steve Bartylla With A Great Buck

Fellow outdoor communicator and seminar speaker with an awesome buck   Steve Bartylla’s Hunt Talk  interview on Advanced Tree Stand Tactics will help you choose your next tree to hunt from. Check out Steve’s Buck […]

Ever Bamboo CEO K.B. Lee reveals how their unique bamboo products will help deer hunters reduce human scent in hunting boots and clothes. Lasts for a year and is recharged by the sun ! It’s […]