The CIFC 2013 has new champions

The 19th season for the Canadian Ice Fishing Championships were held off Lake Simcoe’s Jackson Point in Georgina to crown a new team as Canadian Champion Ice Fishing anglers in 2013.

Friday night’s meet n greet was held at the Georgina arena to go over CIFC rules, regulations and sign in.

Perch were the targeted species during Saturday’s event just north east of Jackson Point. Water depth ranged from 14 – 20 feet in the fishing zone.

The 8am start had decent weather with good ice conditions and low wind.

Conditions got windier as the day progressed till the 2pm deadline.

Teams members with ATV and snow sleds checked into the entry point at Bonnie Boats for gear and bait regulations at first light. Actual fishing could not begin until 8am.

Each 2 person team had to catch 15 perch in total plus keep them alive for release after weigh-in at 2pm. Any bait could be used with no more than four hooks allowed. Only one rod per angler was allowed and team members could only be up to thirty paces apart.

Day one perch fishing started off fast with many anglers catching their quota. Most however decided to go after those jumbos and live released many of their smaller catch. The perch started to shut down on the easy bite around 8:30 am and catching a limit after that stretched all the anglers arsenal of tips and tricks.

Numerous teams failed to catch a limit by the 2pm shutdown.

Perch fishing was tough all day for everyone,

both pros and and amateurs . 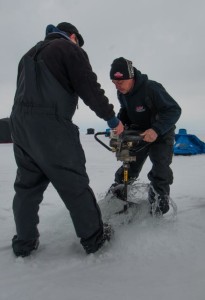 Day two started out with great weather as anglers proceeded three kilometers off shore to the big fish zone. Three times the area as the previous perch zone. Depths ranged around sixty feet.

Most anglers hugged the perimeter of the zone marked off by blaze orange cones. Two lines were allowed per angler and again only up to thirty paces apart was permitted. Many of the larger pop up hut had both anglers huddled inside with two holes drilled outside.

White Fish, Lake Trout were targeted by most anglers with various typical set ups of jigging or tip-ups.  White Fish were caught by a few anglers and many marked fish on the electronics. 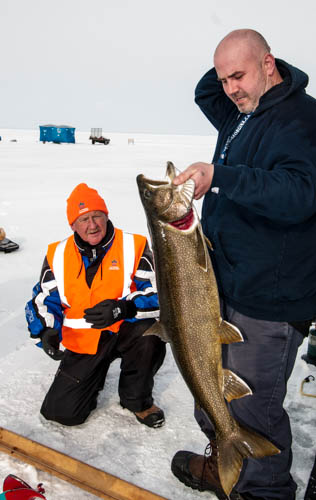 Team 24 had two White Fish for a total of  188 points. Fifty for the fish, fifty for a live release and one point per inch.

Two Ling were also caught by Calvin Perry of Team 24 in the late morning.

That propelled them into the lead. 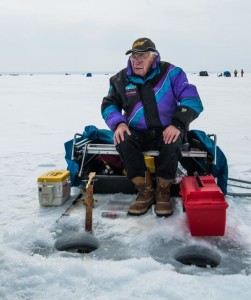 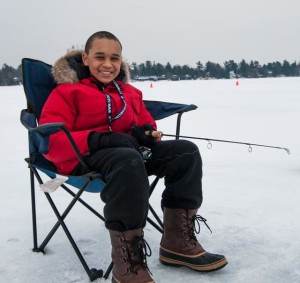 and of course the huge year long effort of 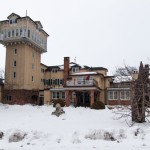 With out the Volunteers it just doesn’t happen

THE AWARDS and CIFC CHAMPIONS FOR 2013 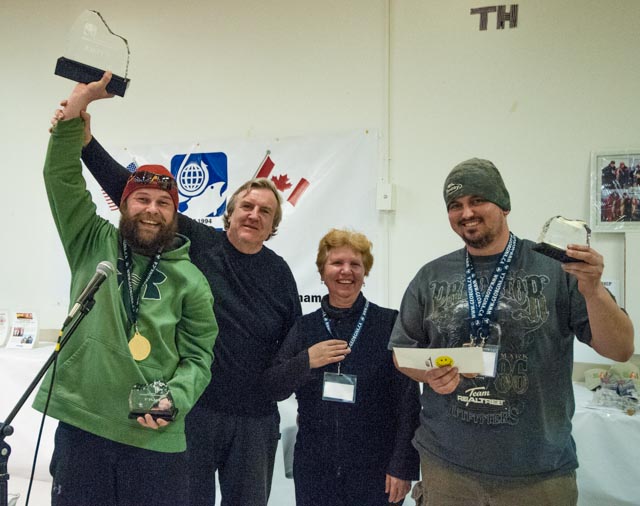 You can also click on these links also to see photos

WildTV want you to vote on the Grizzly Awards

Hunting and Fishing Awards Ceremony Is Coming To Edmonton WildTV is proud to announce the first ever awards ceremony for popular hunting and fishing shows. The Grizzly Awards is an inaugural event happening at Edmonton’s […]

Four Peterborough-area anglers have been fined a total of $2,500

$2,500 in Fines for Four Kawartha Lakes Ice Fishermen Four Peterborough-area anglers have been fined a total of $2,500 for catching and keeping walleye during the closed season and other angling offences. Eric Shaw and […]

My 400 th show since October 2006. A lot has changed in eight years of hunting and fishing online and the real world. Im proud of all the shows and it is still one of […]