The Excalibur Cross bow booth has just that  specialty item for the huntress in your family. The New Pink Camo Vixen II Produces arrow speeds in excess of 285 FPS.

The 150-pound Vixen II is a high performance crossbow manufactured specifically to fulfill the needs of smaller framed hunters, and now it’s available in a camo that will tickle the fancy of any huntress!

Vixen II is now available especially for her, decorated in “Realtree AP Pinkâ” camouflage using the “Kolorfusion” process for amazing contrast and detail.  Our new pink camo Vixen II’s short, light draw and reduced length of pull make it the perfect choice for ladies who want something special and just for them, but don’t be fooled, it still delivers plenty of power, even for North America’s largest game.

Kathy Troubridge co-founder of Excalibur Crossbow with the new crossbow at the C.S.A.A.A. show in Mississauga. 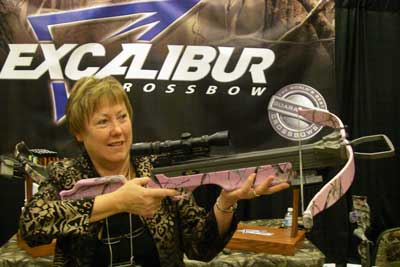 Stay Safe Come Home Ministry of Natural Resources and Forestry Be Safe and Follow the Rules During Hunting Season Ontario encourages hunters to learn and follow the rules when hunting: Hunting Safety Rules:  All […]

Niagara Trappers Council annual trappers workshop. Professional  fur trappers will be demonstrating their skills on Saturday Jan.30. from 10 am to 1pm. Located  at the Abingdon Hall on Silver Road west of Binbrook. They we will […]