Lake Trout are hitting in deep water on Lake Simcoe

Knowing where to fish for Lakers is only part of the success equation. You still have to catch them.

Fatal Force Outfitters knows how to do both. Having fished with Tom on hard and open water over the past few years I discovered early he really knows his stuff as an outfitter.

He emailed me this picture of his last outing on Lake Simcoe so I will let the photos finish my sentence. 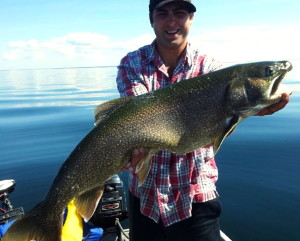 A group of about 60 dedicated individuals graduated from the QDMA Deer Steward 1 course held at the extraordinary Pine Mountain  Lodge at Callaway Gardens, Georgia.   This intensive three day seminar was packed with […]

Licence Suspension, Probation and $5500 Fine for Hunting Offences Two Wallaceburg men were fined a total of $5,500 for night hunting offences. Corby Knight pleaded guilty and was fined $1,500 for careless use of a […]