Rattling some huge antlers  and a well placed Buck Fever Synthetic Scrape were all that was needed.

Alfie set up 120 yards east of me to rattle the antlers. We could easily cover the entire area south of with our rifled  slug guns during the  controlled shot gun deer hunt.

In late October I set out a Buck Fever Scrape line was along a well worn deer trail between the both of us. SpyPoint Pro-X Trail photos confirmed activity mostly in the morning on their way to a bedding area.

Early morning fog and zero wind were ideal for rattling in a an eight point buck the day before checking out the Buck Fever scrape and licking branch we set out the the week before.

So we thought why not try for buck number two as fresh tracks and rubs were present.

A North West wind should still work for our location. 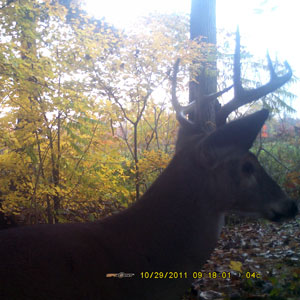 Alfie tickled those well worn antlers at 06;45 and in seconds out stepped a huge 4 1/2 year old bruiser directly east 120 yards away.

He raised his head to scent and looked in my direction 170 yards away. Advancing into the clover field another 10 yards.

The Buck Fever Rut I had spayed in a well worn scrape forty minutes earlier had gotten his attention and certainly  had his attention or riled him up.

He then caught site of  Alfie raising his Browning Auto up and turned toward the safety of the hardwoods.

A single shot echoed across the clover field  as the buck turned to flee then quickly disappeared into the cover of the  forest edge.

Twenty minutes later  after widening the search for signs of blood I was about eighty yards into the pine forest where it became hardwood and found a good blood trail that was more easily followed.

Until then there were doubts about the hit. Luckily it was still early in the day, no rain forecast to eradicate any fresh blood trail.

There are tools available to track wounded deer but we didn’t require any at this time. A roll of toilet paper worked just fine on this trail. When heavy rain is active sign is often difficult to spot.

The buck was headed to the low lying swamp and had only stopped in three spots.

We continued our search now about 250 yards from where it was shot.

The blood trail was still visible on the pushed over reeds and grass.

Movement about 60 yards into the swamp caught my eye.

The almost invisible antlers edged slowly away from our position through the long brown grass.

We backed off to allow the buck to expire instead of pushing it deeper into the swamp.

Twenty minute later the buck was located under a cedar tree.

Scent control or cover scents? What make more sense for late season deer hunters. Host Peter Wood goes over what experts have discussed over the years and how new scent products have evolved to avoid […]

Elk Hunting tips with Jed Speicer from Buck Fever Synthetics and How to keep meat cool with Ryan of Yeti Coolers. Plus a free giveaway of 10 – 8oz bootles of Elk Wallow Juice to […]