Hunting Coyotes with a Rim Fire Rifle in Winter

Will a rim fire rifle like a 17HMR outperform a shotgun?

Prediction by coyotes is on the rise according to news media. Urban and suburban areas are favorite area of coyote predation.  This natural predator will eat almost anything including berries, rabbits, bugs, mice small birds, grasshoppers, frogs and birds when available.

As a scavenger coyotes eat road kill and carrion. When coyotes locate closer to town small dogs and cats are of course one of a coyote’s favorite meals when that opportunity arises. The coyote has few predators that endanger it survival; perhaps bears, wolves or cougars but mostly humans are the top coyote predator.

Landowners and small farms owners have noticed an increase of coyote attacks on sheep, goat’s calves and other farm livestock due to the exploding population of coyotes.

What tools are available to landowners and hunters to combat high coyote predation?

In the past poisoning baits and trapping killed millions of coyotes. Laws and regulations and low hunters numbers contribute to the higher number of predators. Urban and suburban area have many restrictions where firearms are used to control predation.

As a hunter you need to obtain landowners permission to hunt on any private property. Perhaps you know of farmers that have been ravaged by coyote attacks on their livestock. You may know landowners have lost pets and chickens to coyotes.

Always be safe with all firearms and obtain the proper permission to hunt any property.

Using shotguns and rim fire rifles are probably the best choice on smaller land tracts. While archery equipment can be use the success rate is very low. Calling coyotes in close as an art form using a combination of decoys, such as coyote and prey in both motionless and ones that move.  Digital and mouth operated calls also can used very effectively.

Expecting a wile coyote to wander past your concealed hunting location rarely happens. You need to be the top predator to outsmart this predator in their backyard. Normally the best time to hunt coyotes is in late January February and March. That is their mating season.

Coyotes wander singly and pairs and in a pack when on the hunt. Enticing a lone hungry coyote with the proper game calls and using a moving decoy is probably one your best ways to accomplish this.

I have used mouth calls but find it is a bit of learning curve to use them properly. They do have their place when coyotes are close by. However when anyone makes a lot of noise it will attract attention in your direction.

I use a battery operated digital game call manufactured FoxPro Inc. It’s a basic Spitfire model but it works superbly with fresh batteries and positioned in the proper location. It allows you to position a call from 50 to 150 yards away from your position  drawing a coyote’s attention towards the sound and not you. The selective transmitter can use a variable number of calls from screaming rabbits to squeaking mice. When used in conjunction with a movable decoy such as a fluttering bird or ground squirrel it acts like a magnet, as the coyote is transfixed upon your setup.

There are lots of digital game calls on the market after using a FoxPro call I see no reason to switch. Their website provides quick service and have  a lot of other useful hunting information available.

Wearing a face mask in camouflage suited for the terrain is also essential to avoid being spotted. I find across when works better than a wind in my face as a coyote always try to get downwind of you.

Setting up at first light or later in the afternoon is your best option as that is when coyotes travel most. Sitting along the fence line or tree line with open fields in front of you is one your best ways to spot a roving coyote. Try to keep the sunshine at your back or sides and not shining and highlighting your face.

Never underestimate a coyote’s nose as it probably their best defense. While eyesight and hearing are also well above a humans senses it can be beaten. Keeping the wind in your favor wearing the proper camouflage and making proper calling techniques. You be the top dog.

Coyotes will travel long distance to enjoy a free meal so entering your stand location must be done in a way that you will not be spotted. Walking on the top of a hill will get you busted by every coyote in the area, as you will be easily spotted.

While coyotes can be shot anytime where and when legal they obviously travel more at first light and last light situations. If you’re setup at the same location and haven’t seen any sign in 20-30 minutes it’s time to move to a different location. Again leave your location as quietly and hidden as possible to avoid being sighted by your prey.

Weather conditions also play part in your hunt. Rainy or snowing days are not best for hunting. The same as with high wind conditions. If you know when the weather will be changing that’s the time to be out there as all animals be on the move in search of food.

As with any hunting pre-and post weather fronts is the best time to be out there.

As mentioned earlier rim fire rifles or shotguns can be used on smaller tracts of land when there are out buildings in the area. These two choices will keep your range under 200 yards. If you’re sitting in a field that is 200 yards wide and you’re in the middle you have to ensure that trajectory will not be in an unsafe direction. 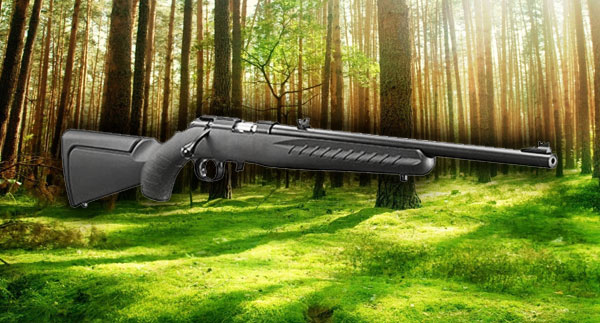 For shotguns you can use a rifle barrel shotgun that shoots a sabot accurately out to 175 yards. Or you can use a shot shell in buckshot out to about 80 yards for those up close shots.

For rim fire rifle I would suggest using a 17 HMR caliber. The Savage model 93 is a great little rim fire rifle that’s modestly priced. They come in both synthetic and wooden stocks as well as left-hand and right-hand models.

The addition of a bipod or shooting stick will allow you to hold rock solid still when shooting those longer distances.

Using a high-quality scope on your rifle it will increase your chances of making that shot accurately every time. Often the price of a good scope is more than the price of your rifle.

You went to school together as much light as possible in those low light conditions do not be too overpowered and trying to cite on a moving target. It’s a personal choice of whether you use fix power or scope the can be adjusted accordingly to the conditions.

Whatever scope you use ensures that it is fixed solid to your scope mounts on your rifle or shotgun. The use of Loctite is recommended on all screws.

As we’re talking about optics using a pair of quality binoculars or spotting scope is another great way to ensure your hunting trip is a successful outing. Sitting still blasting across fields and hills is a lot easier good quality optics. I use Vortex Optics on my, rifles and shotguns as well as their line of binoculars and spotting scopes for their ease-of-use affordable price and lifetime guarantee.

As mentioned a 17 HMR round is very accurate. Using a 20 Magnum or 22 Long Rifle are also other choices you can make but you have to be aware of the distances as they will shoot up to a mile away.

Properly sighting in your rifle and knowing how performs at set distances will be the key to you downing your prey with one shot. Using a rangefinder on bushes and trees is one way to determine the distance to your coyote when it is traveling towards you. When you know you’re going to shoot them accurately at 100 and 150 yards making the shot is easy as simply squeezing the trigger.

Hitting a coyote in the vitals is essential for a clean quick kill. You have to hit in the lungs, heart or liver to make the kill shot. Especially when using such a small caliber. When using buckshot with your shotgun you have a larger zone to shoot at.

My Browning BPS rifled slug barrel shoots Hornady Sabot ammo. This ammo is dead on and hundred and fifty yards for clean quick kills. However at three dollars a bang it does get expensive. If you only have a few coyotes to get rid of this is a great way to do it. Especially when not using the pelt.

When sighting in or practicing I use SlammerHi targets for fast sighting in. Normally it takes just two rounds using the Click Stick Pro that comes with the target. You can use a full size target for realism after you’re sighted in properly.

What you do with your coyote after the hunt is up to you. Many hunters are trappers and use the coyotes for their own use or for pelt sale where legal.

Predator hunters help out farmers landowners when coyotes start take over your property. In most cases it’s only one or two coyotes that are the habitual culprits. You still need a healthy coyote population control vermin, rabbits and other pesky critters.

Be safe and sure of your target before pulling the trigger. Take a kid it with you hunting when possible I’m sure they would love to operate the FoxPro Spitfire transmitter Or spot that wile coyote through your Vortex Optics.

Bass Talks expert Dave Johnston gives a seminar about top to bottom bass fishing, This week show is all about bass, hey it summer time! Don’t forget to subscribe and comment on Itunes. Host: Peter […]