Kip’s Korner is written by Kip Adams, a Certified Wildlife Biologist and Northern Director of Education and Outreach for the Quality Deer Management Association (QDMA)

As a member of QDMA I get some great information written by Kip Adams. Although mostly USA statistics and information a lot of this can be used and applied by Canadian hunters.

The most important tenet of Quality Deer Management (QDM) is to balance the deer herd with the habitat’s ability to support it.  Critics often speak of trophy bucks and antlers as the driving force, but hunters and managers who truly delve into the QDM philosophy quickly learn the correct number of deer for the landscape comes first, followed by balanced sex ratios and complete age structures.  Fortunately, you can work on these three objectives simultaneously by harvesting the biologically appropriate number of antlerless deer and passing young bucks. 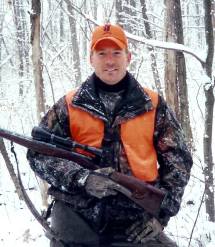 Many deer herds are more in balance with the habitat today than they’ve been in the recent past, and this is cause for celebration.  However, some areas still have overabundant deer herds resulting from harvesting too few antlerless deer.  Harvesting the proper number of antlerless deer can be difficult for a variety of reasons including hunters’ unwillingness to shoot them; a lack of opportunity with regard to access, seasons and/or bag limits; or simply low hunter numbers or their inability to shoot enough antlerless deer.  Most states currently have more liberal antlerless seasons and bag limits than they’ve had in the past, but some landowners and clubs still have difficulty acquiring enough antlerless tags or permits.

Given that hunter numbers have declined, the average hunter is now asked to take more antlerless animals in overabundant deer situations.  Unfortunately research shows there is a limit to the number of deer an individual hunter is willing to take annually.  This limit is generally less than three deer, and given that one or two may be bucks, the number of antlerless deer is further reduced.  One strategy to increase the impact of the antlerless harvest is to maximize harvest of adult does and minimize harvest of fawns.  I’ll clarify there is nothing wrong with harvesting fawns, and I routinely prescribe a fawn harvest to collect biological data from this age class.  However, if you’re struggling to balance the deer herd with the habitat, and you’re limited in the number of antlerless deer you take during the hunting season, focusing on adult does rather than fawns can help you reach your management objectives more quickly.

The QDMA recommends buck fawns constitute less than 10 percent of your total antlerless harvest.  Educating hunters on distinguishing fawns from adult deer and even separating buck and doe fawns in the field is a relatively simple matter.  By observing head and body features and behavior, most hunters can accurately distinguish between fawns and adults and buck and doe fawns most of the time.  I stress that last part because mistakes will happen.  Specifically, focusing on adult does rather than buck fawns provides more meat for the table, helps balance the herd more quickly, and allows additional buck fawns to survive.  More buck fawns means more yearling bucks the following year, which is good for balancing the adult sex ratio and for hunter satisfaction.

Let’s use a real-world example from where I live in Pennsylvania.  Before the Pennsylvania Game Commission implemented the Deer Management Assistance Program (DMAP) in 2003 most Pennsylvania hunters could only get one or two antlerless tags.  On my family’s farm it was difficult to harvest enough antlerless deer with this restricted bag limit even with an extremely high hunter density of nearly one hunter per 25 acres.  During this time, when someone shot a button buck they had to use their only antlerless tag on it (or one of two), and thus they lost the ability to use it on an adult doe.  We cared far less about removing button bucks than about our lost ability to remove adult does.  Fortunately the Game Commission provides DMAP to most landowners today, and it has allowed us to achieve the proper antlerless harvest for the past several seasons.  Our forester even stated that we are the poster child for oak regeneration in Pennsylvania.  That is a far cry from the denuded oak woods I walked as a child.

Some contend protection of buck fawns is unnecessary, but in situations like the example above I’ll argue that learning to distinguish between antlerless deer in the field and selecting against buck fawns can dramatically help managers meet their deer density goals.  Many state agency biologists recognize this and provide information to hunters on how to identify antlerless deer on the hoof.  With escalating antlerless harvests in many states, we were interested in how the buck fawn harvest has changed over the past decade.  To calculate this, QDMA surveyed all state deer project leaders and asked what percentage of their total antlerless harvest was buck fawns in 1998 and 2008.  The data showed the percentage of buck fawns in the antlerless harvest declined from an average of 19 percent in 1998 to 16 percent in 2008.  This savings may appear small, but given the harvest of approximately 3.4 million antlerless deer in 2008, a 3 percent savings would have equated to 102,000 buck fawns.  Nationally, the percentage ranged from 3 percent in Mississippi (data collected on wildlife management areas and DMAP properties) to 25 percent in Ohio and Wisconsin in 2008.  The percentage in Ohio and Wisconsin is not surprising as both states have highly productive deer herds (i.e., a lot of fawns entering the populations) and aggressive antlerless harvest programs.  However, both states could benefit if some of those buck fawns harvested were adult does instead.  Notable declines in buck fawn harvest from 1998 to 2008 occurred in New Jersey (25 to 13 percent), Georgia (26 to 18 percent), North Carolina (17 to 12 percent) and Virginia (22 to 17 percent).

Many states have progressive deer management programs, and it’s showing in the health and quality of their herds and habitats, and especially in the satisfaction of their hunters.  I’ll reiterate that many deer herds are in balance with the habitat today, and reduced doe harvests are needed in these areas.  The focus of this article was for areas with too many deer and how targeting adult does rather than fawns could increase hunters’ effectiveness at balancing the herd with the habitat.  As fewer hunters are asked to harvest additional deer, more effective and efficient strategies become necessary.  Selecting adult does over buck (and doe) fawns meets this criterion, and it provides additional meat for the table.  Sounds like a win-win situation to me.

Kip’s Korner is written by Kip Adams, a Certified Wildlife Biologist and Northern Director of Education and Outreach for the Quality Deer Management Association (QDMA).  The QDMA is an international nonprofit wildlife conservation organization dedicated to ethical hunting, sound deer management and preservation of the deer-hunting heritage.  The QDMA can be reached at 1-800-209-DEER or www.QDMA.com.

Hunting Course For Future Wildlife Professionals Now Accepting Applications   Long Point Waterfowl is a non-government organization that is dedicated to wetland and waterfowl research, conservation and education in the Great Lakes region. We developed […]

May 21, 2014 Peter Wood Outdoors in Ontario Comments Off on Take Me Hunting Contest