Been hunting deer for 40 years , enjoyed hunting every season.

This year I got my best buck yet!

I hunt hard every year and always enjoy some venison in the freezer before the season ends.

This year with the windy warmer weather it was a challenge to see any deer in the daylight hours.

Trail cam pictures on my Spypoints indicated indeed many deer were nocturnal on the farms I hunted.

On those days I did hunt there were only does and small spikers wandering around. 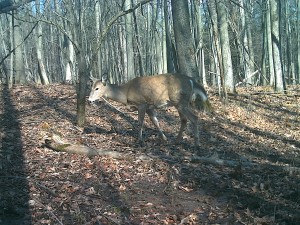 My Buck Fever synthetic scraps and rubs were being visited constantly, some even mid day.

Just not the Buck I had in mind at least on this trail cam spot.

Last year he was broadside but no shot opportunity with a Maple tree covering his vitals.

I never did get him on trail cam pics ever over 3 years. But he did have a core area I never entered.

I refreshed and set up fours Buck Fever Canada scrapes and rubs again this year so I could hunt the wind close but not in the core.

When November  rolled around there were 16 scrapes that I counted all within 40 yards of the funnel entrance to his core area.

Numerous other bucks were competing for dominance it seemed.

Not the one I was looking for, but a nice buck indeed.

Several hunters all filled tags during that hunt but I hunted with my bow in another area that was strictly bow only.

Did I mention it was warm and rainy?

Temperatures close to 12c or for my American friends mid 50s!

Never saw a deer all week where typically numerous sightings every day ( Thats why I go there!)

Decided I would try and fill my shotgun tag in the December hunt as time was running out and weather was indeed a factor.

Hunted the day before opener with my bow as archery season still valid with no sighting,

Until I was walking out and saw deer on the rise across a pond.

Next morning mild and windy, sat in stand till 11am, no deer.

Came out for lunch and back in from 1pm till last light at 5:11, no deer, but I could hear them behind me just past the thicket close to that magic core area.

You know the place were you should’t enter unless absolutely necessary!

I did a quick check on two Spypoint Cams at two different scrapes but no new sightings.

The next morning another hunter would be sharing the farm with me during the shotgun hunt so we texted back and forth to set up safe areas to hunt.

He had a proven location that always had action, I know because I set up a Buck Trap with an active BFC scrape over the last 3 years.

It was in fact the same location I had a chance at filling a bow tag last year on this 3 1/2 yr old. 10 pointer. A very nice deer.

Had him at 48 yards with a large Maple Tree on his vitals when he simply walked away presenting no shot.

Tuesday morning wind changed direction right at first light, I knew I would have to move when it switched from S.E. to the N.W. but wanted to give it another 20 minutes just in case.  As it was shotgun season I knew my Browning BLR was good out to 159 yards with Hornady SST slugs and my Vortex Optic Red Dot scope. 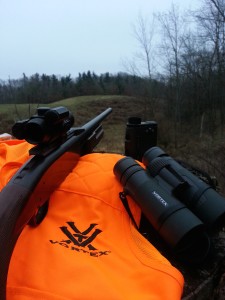 At 7;40 I heard three shots from Paul’s location about 300 yards north of me, followed by a fourth shot!.

I waited for his text to see if he needed help dragging out what ever he had shot.

I promptly packed up and set out for his location. He wasn’t happy when I got there.

We checked for any sign of blood,,,nothing, just hoof marks headed off towards the north east.

We figured that would be the last we saw of that buck this season.

I asked him if his shotgun was off,,,,,he replied “it was ok three years ago when sighted in.”

Suggested he head home and check the gun, his ammo and his aim before continuing his hunt. He declined as it was a 90 minute drive one way.

We talked for another 20 minutes then I headed back to my stand.

Between where my stand was and there were another 12 active scrapes, thickets and swamp. I had only been back this way once this year in early September for a quick look then twice last year looking for sheds.

I didn’t take long to bring down the summit and set up in a more favourable tree with the right wind right at the funnel. 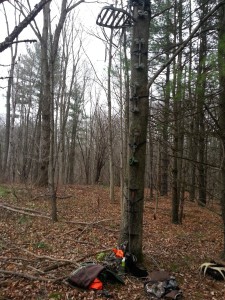 Thanks SUMMIT and Hunter Safety Systems

Moving my stand and setting up took from 10;45 till 11;15. surprisingly fast with just a few tinkles of metal on metal from the Summit steps.

I had planned to be sitting there until last light and try and fill my buck/doe tag for the freezer today.

Just before noon I heard a deer coming down the trail rather quickly from the west on my left, not the right as I anticipated from the north.

Being a lefty it never fails, always the wrong side.

The funnel was actually a four way intersection, great for a bow as the farthest shot would be 40 yards.

As this mature doe appeared about 25 yards away and was coming towards me I reached for my cell phone as I though I would take a fast picture.

That was until I heard a tending grunt still in the thicket from which she nervously appeared.

Back to plan A as I reached for my Browning BLR.

Mere seconds had passed since she appeared and I heard the grunt when the buck broke through the thicket.

The doe hopped a few paces as the buck froze behind some saplings grunting again.

Tunnel vision kicked in as I zoned in on his vitals

The buck took three more steps as by body contorted to swing to my extreme left.

The Vortex red dot was on the quartering away bucks vitals when he  was eight yards away as I squeezed.

I immediately saw red as he stumbled trying to dig in for traction.

The sound of cedar branches breaking followed by a loud thud about 30 yards away sealed the deal.

I could just make out where he lay through the cedar trees.

In all  of about a dozen seconds my 2015 controlled deer hunt was done.

I had already taken a selfie when Paul appeared. He offered to take some pics and shook my hand.

Headed back again next week to try and fill my last bow tag, looks like the weather is changing.

No snow yet this season!!

How about your season?

Did the weather have an effect?

New Fisheries Management Plan includes regulations for the Kawartha Lakes area Anglers in Ontario spend more than a million days fishing every year, and that number may soon rise. The Ministry of Natural Resources (M.N.R.) […]