MNR and NEC continue the battle to remove archery business and shop from private property.

The Niagara Escarpment Commission bolstered by big brother government arm of the Ministry of Natural Resources continues their fight to remove Mackie’s Archery Shop and training business from his property in Lincoln.

Mackie’s legal nightmare with the government started when NEC’s official plan for restoration decided archery had no place on the Niagara Escarpment and was now in non-compliance. They proceeded to charge Mackie in an attempt to have the building removed and his business shut down. Fighting back with limited resources and support has taken its toll on the Mackie family over the past few years.

Mackie archery range was often used by the Beamsville archery team and local Olympic archers used for training. His range also had a program for handicapped individuals with support from the town. Mackie’s fifteen acre property is both his home and livelihood.

The Ontario Landowners Association stepped in to help Bob with his legal fight with the NEC and MNR, Numerous court appearances resulted in appeal after appeal in an attempt to resolve the long lasting dispute. 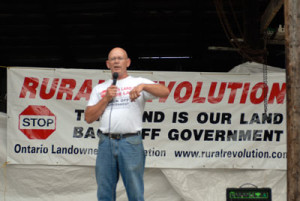 This week another day in a Niagara court may decide Bob’s fate to see if he can continue his archery business on his own property or not.

To give Bob some support log onto his web site