Earlier this week, Minister of Natural Resources Linda Jeffrey signed an order banning the possession and use of natural products containing body parts or fluids from members of the deer family for the purposes of hunting in Ontario. The move, along with two other regulatory changes relating to the movement of animals and animal parts, was supposedly designed to prevent the introduction and spread of Chronic Wasting Disease (CWD) in Ontario. Unfortunately, these half measures fall far short of what actions should have been taken, and not only fail to address the problem, they leave outdoors retailers on the cusp of hunting season with inventories of natural deer attractants that can be sold, but no longer be used by hunters, at least in Ontario.

CWD is a fatal degenerative brain disease that affects members of the deer family, including moose, elk and potentially caribou. The disease has established a significant foothold in Alberta and Saskatchewan and fifteen U.S. states, but has yet to be discovered in Ontario. The main source for the spread of the disease is game farms for deer and elk, the same source of the products now banned by the Ministry. Unfortunately, the new regulations do nothing to eliminate the primary source of the disease (game farms), do not prohibit the sale and use of the product for uses other than hunting, and have not taken into consideration the losses that will be suffered by retailers. Several ministries share responsibility for keeping CWD out of the province, including the MNR, Ontario Ministry of Agriculture, Food and Rural Affairs (OMAFRA), Ministry of Consumer Services (MCS) and the Canadian Food Inspection Agency (CFIA), but a concerted plan of action, even among provincial ministries, is sadly lacking.

“Two years ago, the O.F.A.H. told the MNR that if they intended to ban natural attractants, they needed to give retailers sufficient lead time to source out alternative products, and needed to ban the sale, not just the possession of these products if they were serious about preventing the potential introduction of CWD to Ontario. They didn’t listen, and as a result, retailers are left holding the bag. The new regulations are nothing more than a band aid that achieves little of real value in terms of eradicating the threat posed by the disease,” said Dr. Terry Quinney, Provincial Manager of Fish and Wildlife Services. “By allowing the continued sale of these products for uses other than hunting, they have not stopped the products from potentially introducing the disease into the wild, and have placed retailers in an awkward, and potentially legally tenuous position. In fact, our legal counsel tells us that by selling the product, retailers may leave themselves open to charges under Section 77 of the Provincial Offenses Act. Only by banning the sale and use of the product by all potential users, not just hunters, restricting the movement of animals and animal parts from outside the province, and banning deer and elk farms, the major source for the transmission of the disease, with compensation to the owners, would the government come close to achieving their stated goal. The MNR has failed Ontario’s wildlife.”

Dr. Quinney also noted the irony that the MNR has not banned the sale and use of these attractants by Ontario hunters in other jurisdictions. “It’s illogical that the MNR would ban the use of a product in Ontario, but not prevent the sale of the product to be used in other provinces. You have to question why the government, with its focus on ‘biodiversity,’ refuses to ban deer and elk farms, and is instead seemingly content to introduce regulations that target hunters and outdoors retailers, without addressing the major source of the disease itself.”

With over 100,000 members, subscribers and supporters, and 670 member clubs, the O.F.A.H. is the largest nonprofit, charitable, fishing, hunting and conservation-based organization in Ontario, and the voice of anglers and hunters. For more information, visit www.ofah.org. 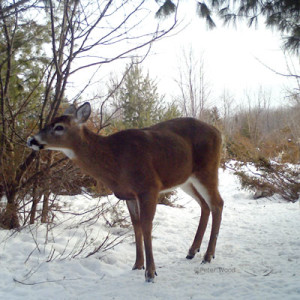 You can tune in to Ripple Outdoors Podcast episode #221 for my interview with the MNR about this upcoming legislation concerning hunters and retailers.

Government Recognition For Ontario’s Conservation Officers Twenty-eight conservation officers from across southern Ontario are receiving Peace Officer Exemplary Service Medals in recognition of 20 years of exemplary service. Awarded under the authority of the Governor […]

Fred’s Camo got you covered podcast#164