Management of bear populations by science, not emotion, long overdue

Fourteen years after the Harris Conservatives cancelled the spring bear hunt under pressure from animal rights activists, the Wynne Liberal government is proposing a two-year pilot project in eight wildlife management units in northern Ontario to address problem bear issues.   ”Ontario’s spring bear hunt was a successful wildlife population management tool that assisted in maintaining the density of bears at levels that minimized dangerous encounters between people and bears, and controlled the population at a sustainable level. 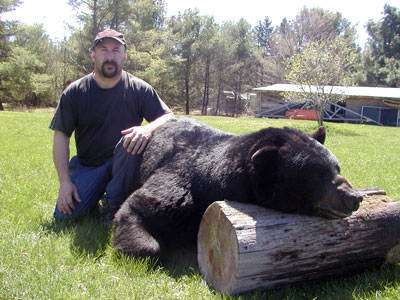 This was good for public safety and good for bears,” said OFAH Executive Director Angelo Lombardo.   ”Since the cancellation of the spring bear hunt in 1999, the OFAH has been advocating for a return of the hunt and we are pleased that the provincial government has finally recognized the value of this valuable wildlife management tool and has proposed a bear management program in response to problem bears in northern Ontario.

While this is not the restoration of a full spring hunt, it is a positive start, and the OFAH looks forward to working with the provincial government and local municipalities so that the full benefits of regulated hunting can be realized,” Lombardo added.

The absence of a spring bear hunt has created a severe public safety risk, with five bear attacks being reported across the province this year. Before its cancellation, the spring bear hunt also generated over $40 million per year in economic activity and sustained a number of jobs in northern Ontario, jobs that have since flowed to the neighbouring provinces of Manitoba and Quebec which continued to have hunts.   ”The OFAH has been unwavering in its position that the spring bear hunt is a valuable wildlife management tool that enhances public safety and controls the bear population at optimum levels.

The recent introduction of Bill 114 by Liberal MPP Bill Mauro has served to focus attention on this growing problem,” said Lombardo.

The hunt would be open to Ontario residents only, will not allow the hunting of cubs or female bears with cubs and would require municipalities in those areas to opt-in to the program.

The proposal will be subject to public comments on Ontario’s Environmental Registry.   With over 100,000 members, subscribers and supporters, and 710 member clubs, the OFAH is the province’s largest nonprofit, fish and wildlife conservation-based organization, and the VOICE of anglers and hunters.

The Essex Youth Pheasant Hunt was another big hit with new young shooters, mentors and all the dedicated volunteers who helped out. Young hunter Autumn Bergeron taked with me about her experience and what she enjoyed […]

Want Your Voice To Be Heard In Ontario’s Urban Fishing? The Ministry of Natural Resources and four Conservation Authorities – Toronto and Region, Credit Valley, Central Lake Ontario, and Ganaraska Region have initiated the preparation […]