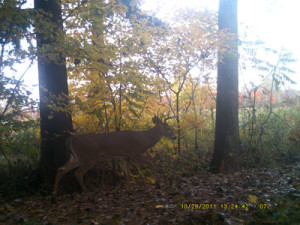 A man was bounced from council chambers during a debate about deer Monday.

City council, in a 10-3 decision, passed a recommendation that will see a by-law come before them allowing deer to be hunted by bow in certain areas of the city. It will also ban the feeding of deer.

Henry Wojak was making the only deputation opposed to the plan when meeting chair Coun. Trevor Giertuga told him he was out of time. Wojak continued to speak until his microphone was cut off. As he walked away from the table, Wojak directed a profanity towards city council.

Geirtuga then asked Wojak to leave or he’d call security to escort him out. Wojak accepted the challenge.

Deputy police chief Andy Hay was asked by Giertuga to intervene. Hay asked Wojak to leave and stood near him until security came to escort Wojak out of chambers and off the property. Wojak made an obscene gesture toward councillors as he was leaving.

“That type of behavior won’t be tolerated in council chambers,” Giertuga said.

The city’s discharge of firearms by-law will be changed so that deer hunting can take place on private lands within city limits south of Kaministiquia and west of the Thunder Bay Expressway with certain limitations. Hunters must have written permission from the property owner, must be in a stand at least three metres high and must be further than 75 metres from a home or road.

“A deer herd with plenty to eat and is not hunted can double its size every three years,” he said.

Angus said with over 200 deer killed on city roads every year, at least a hunt would be more humane and not endanger drivers.

“We’re talking about which way they’re (deer) going to be killed,” Angus said.

But Coun. Joe Virdiramo, one of three councillors to turn the idea down, said that the city should take more time before it makes a decision. Just like bike lanes. Virdiramo said he didn’t want to see council rush to make a decision that turns out to have more controversy than they thought.

“I’d like to see a full report,” Viridramo said. “Which wasn’t presented.”