Sibbald Point Provincial Park, Lake Simcoe: Despite almost constant rain and miserable fishing conditions, an astounding 78 teams competed in the first annual PERCHIN FOR MS Fundraiser Perch Fishing Tournament Sat. March 12, 2011.  “I was completely flabbergasted that so many anglers came out to fish this event,” said host and organizer Doug Poirier.  “These anglers all heard the same weather forecasts we did – and all knew the rains were coming. They decided to fish anyway and although they got wet, they did not let the rain dampen their spirits,” he said. 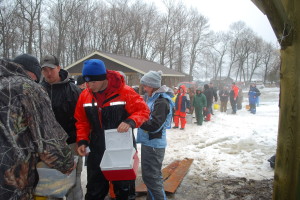 At 8am, all anglers took off from the newly renovated public launch area at Sibbald’s. They could fish anywhere within the 1 ½ x2 km designated zone- well marked with orange pylons. Some elected to stay in one area and capitalize on the roaming abundant perch found within most of the zone. Others, like the eventual winners – Wil and his son Izaak Wegman of Bradford, used their Cross Sleds to traverse within the zone to upgrade their catch. “We had our 10 perch within 20 minutes or so, but then the trick was to try and find the jumbo’s Simcoe is famous for. We elected to move around a lot- and hope for a bigger fish here and there to upgrade,” said Izaak. “We found HT Marmooska jigs were most productive in the morning but by afternoon we switched to HT dropper spoons to get our fish,” Izaak remarked. The father-son duo weighed in 5.78 lbs worth of perch for their win.

The biggest fish of the event was caught by Brad Jamieson who landed a beautiful 1.2 lb, 13 inch perch. Brad won a taxidermy replica mount of his fish to be done by Advanced Taxidermy and Wildlife Designs.

The tournament was more than just about the fish or the weather however. “I started this event because I wanted to promote education and awareness around MS and I thought what better way to do that than through a fishing derby.” As an avid angler and Conservation Officer who lives with MS daily, Poirier knows firsthand about its limitations, but says that unless you have a friend or relative with it, people seldom have a good understanding of the disease. “The goal of the event was also to raise a bit of money for MS and I am pleased to announce that thanks to some generous monetary donations we raised almost $4,000 that will go directly to the MS Society of Canada,” said Poirier.

Although most anglers who fished the MS Perch Fundraiser were from the GTA, others came from Owen Sound and Niagara in the west to Muskoka and Halliburton in the north and east to Ottawa. There were even some anglers from the US. Many were hard core competitive anglers who look for competitions like this to test their skills.  Others were recreational ice anglers who enjoy meeting others in a fun-filled event where proceeds go to a worthwhile cause.

Not only did anglers come out in force to support the fundraiser, but so too did sponsor and individual support. “The prizes supplied by companies and individuals far exceeded my expectations. Our community really showed the true meaning of “Community” with the way they all came together to sponsor this event!” said Poirier. 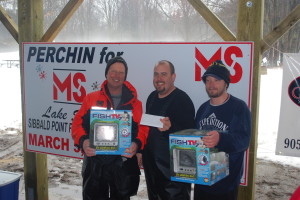 TOP EIGHT … and Their Weight

Exciting New Job Opportunities For Youth in  Ontario’s outdoors. This year, thousands of youth from across the province will develop knowledge and skills in natural resources management through experience-based work and learning positions. The province […]

Ontario’s CONSERVATION OFFICERS ENCOURAGE SAFE BOATING   The snow is gone, the blackflies are out – and the May long weekend is within sight. For tens of thousands of Ontario boaters and anglers, it’s the […]

July 28 & 29 Hooked on Fishing Day Camps Fifty Point Conservation Area Registration is now being accepted! First time anglers are invited to participate in a one day fishing workshop at the Fifty Point […]